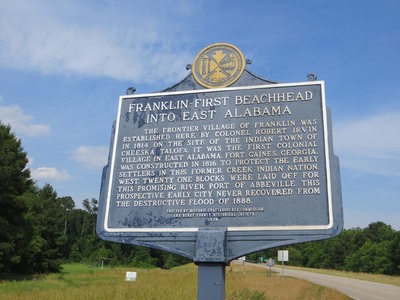 The text on the marker reads: "FRANKLIN-FIRST BEACHHEAD INTO EAST ALABAMA The frontier village of Franklin was established here by Colonel Robert Irwin in 1814 on the site of the Indian town of Cheeska Talofa. It was the first colonial village in east Alabama. Fort Gaines, Georgia, was constructed in 1816 to protect the early settlers in this former Creek Indian Nation, West. Twenty-one blocks were laid off for this promising river port of Abbeville. This prospective early city never recovered from the destructive flood of 1888. ERECTED BY HISTORIC CHATTAHOOCHEE COMMISSION AND HENRY COUNTY HISTORICAL SOCIETY 1978". Historic Chattahoochee Commission Alabama-Georgia emblem at the top of the sign.