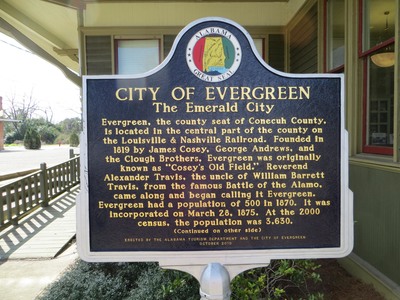 The marker reads: "CITY OF EVERGREEN The Emerald City Evergreen, the county seat of Conecuh County, is located in the central part of the county on the Louisville & Nashville Railroad. Founded in 1819 by James Cosey, George Andrews and the Clough Brothers, Evergreen was originally known as "Cosey’s Old Field." Reverend Alexander Travis, the uncle of William Barrett Travis, from the famous Battle of the Alamo, came along and began calling it Evergreen. Evergreen had a population of 500 in 1870. It was incorporated on March 28, 1875. At the 2000 census, the population was 3,630. (Continued on other side) ERECTED BY THE ALABAMA TOURISM DEPARTMENT AND THE CITY OF EVERGREEN OCTOBER 2010". Image of Alabama Great Seal at the top of the sign.