City of Brundidge and the Bass House Marker, Brundidge, AL 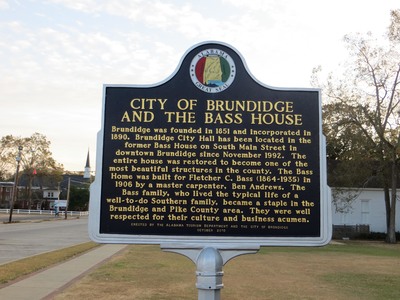 The marker reads: "CITY OF BRUNDIDGE AND THE BASS HOUSE Brundidge was founded in 1851 and incorporated in 1890. Brundidge City Hall has been located in the former Bass House on South Main Street in downtown Brundidge since November 1992. The entire house was restored to become one of the most beautiful structures in the county. The Bass Home was built for Fletcher C. Bass (1864-1935) in 1906 by a master carpenter, Ben Andrews. The Bass family, who lived the typical life of a well-to-do Southern family, became a staple in the Brundidge and Pike County area. They were well respected for their culture and business acumen. ERECTED BY THE ALABAMA TOURISM DEPARTMENT AND THE CITY OF BRUNDIDGE OCTOBER 2010" Image of Alabama Great Seal at the top of the sign.