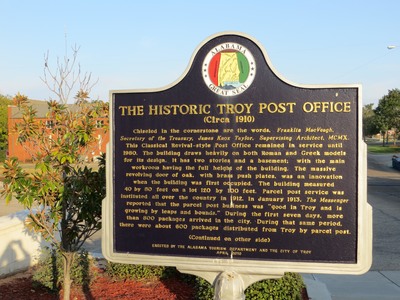 The marker reads: "THE HISTORIC TROY POST OFFICE (Circa 1910) Chiseled in the cornerstone are the words, Franklin MacVeagh, Secretary of the Treasury, James Knox Taylor, Supervising Architect, MCMX. This Classical Revival-style Post Office remained in service until 1980. The building draws heavily on both Roman and Greek models for its design. It has two stories and a basement; with the main workroom having the full height of the building. The massive revolving door of oak, with brass push plates, was an innovation when the building was first occupied. The building measured 40 by 80 feet on a lot 120 by 100 feet. Parcel post service was instituted all over the country in 1912. In January 1913, The Messenger reported that the parcel post business was “good in Troy and is growing by leaps and bounds.” During the first seven days, more than 800 package arrived in the city. During that same period, there were about 600 packages distributed from Troy by parcel post. (Continued on other side) ERECTED BY THE ALABAMA TOURISM DEPARTMENT AND THE CITY OF TROY APRIL 2010". Top of the sign: Image of Alabama Great Seal.