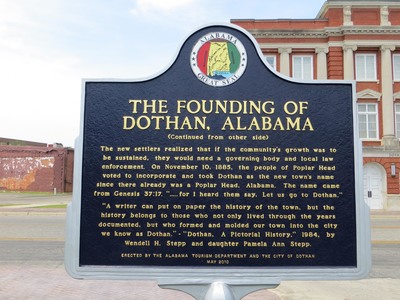 The marker reads: "THE FOUNDING OF DOTHAN, ALABAMA The new settlers realized that if the community’s growth was to be sustained, they would need a governing body and local law enforcement. On November 10, 1885, the people of Poplar Head voted to incorporate and took Dothan as the new town’s name since there already was a Poplar Head, Alabama. The name came from Genesis 37:17 “….for I heard them say, Let us go to Dothan.” “A writer can put on paper the history of the town, but the history belongs to those who not only lived through the years documented, but who formed and molded our town into the city we know as Dothan.” – “Dothan, A Pictorial History,” 1984, by Wendell H. Stepp and daughter Pamela Ann Stepp. ERECTED BY THE ALABAMA TOURISM DEPARTMENT AND THE CITY OF DOTHAN MAY 2010". Top of the sign: Image of Alabama Great Seal.