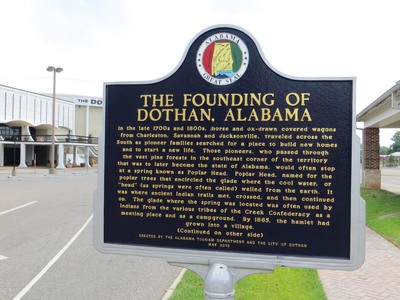 The marker reads: "THE FOUNDING OF DOTHAN, ALABAMA In the late 1700s and 1800s, horse and ox-drawn covered wagons from Charleston, Savannah, and Jacksonville traveled across the South as pioneer families searched for a place to build new homes and to start a new life. Those pioneers, who passed through the vast pine forests in the southeast corner of the territory that was later to become the state of Alabama, would often stop at a spring known as Poplar Head. Poplar Spring, named for the poplar trees that encircled the glade where the cool water, or ”head” (as springs were often called) welled from the earth. It was where ancient Indian trails met, crossed, and then continued on. The glade where the spring was located was often used by Indians from the various tribes of the Creek Confederacy as a meeting place and as a campground. By 1885, the hamlet had grown into a village. (Continued on other side) ERECTED BY THE ALABAMA TOURISM DEPARTMENT AND THE CITY OF DOTHAN MAY 2010". Top of the sign: Image of Alabama Great Seal.