The County Older than the State Marker, Abbeville, AL 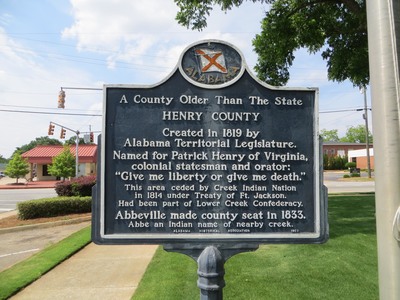 The marker reads: "A County Older Than The State HENRY COUNTY Created in 1819 by Alabama Territorial Legislature. Named for Patrick Henry of Virginia, colonial statesman and orator: “Give me liberty or give me death.” This area ceded by Creek Indian Nation in 1814 under Treaty of Ft. Jackson. Had been part of Lower Creek Confederacy. Abbeville made county seat in 1833. Abbe an Indian name of nearby creek. ALABAMA HISTORICAL ASSOCIATION 1957". Top of sign: Image of Alabama state flag.