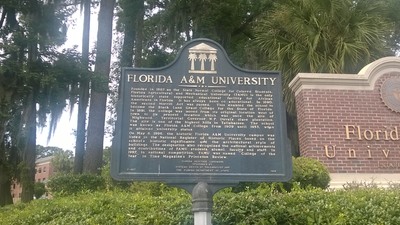 The marker reads: "FLORIDA A&M UNIVERSITY -- Founded in 1887 as the State Normal College for Colored Students, Florida Agricultural and Mechanical University (FAMU) is the only historically state supported educational facility for African Americans in Florida. It has always been co-educational. In 1890, the second Morrill Act was passed. This enabled the school to become the Black Land Grant College for the State of Florida. In 1891, the college was moved from its original location west of town to its present location, which was once the site of “Highwood,” Territorial Governor W.P. Duval’s slave plantation. It is on one of the highest hills in Tallahassee. The school was known as Florida A&M College from 1909 until 1953, when it attained university status. On May 6, 1996, the historic Florida A&M College campus was listed in the National Register of Historic Places based on the school’s historic significance and the architectural style of its buildings. The designation also recognized the national achievements and contributions of FAMU students, alumni, faculty and staff. In 1997, in national competition, FAMU was named “College of the Year” in Time Magazine’s Princeton Review. F-397 FLORIDA HERITAGE LANDMARK SPONSORED BY SYSTEMS DESIGN OF TALLAHASSEE AND THE FLORIDA DEPARTMENT OF STATE 1998" National Register of Historic Places #96000530 Top of sign: Florida Heritage emblem

This is one of at least three identical markers that are located on the FAMU campus. This one is at the entrance to campus near Adams and Palmer Streets.