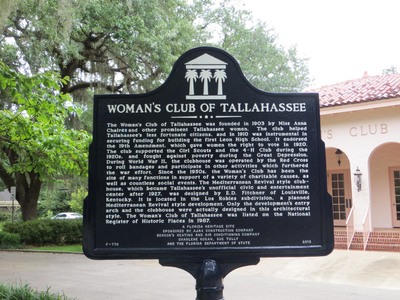 The marker reads: "WOMAN'S CLUB OF TALLAHASSEE The Woman's Club of Tallahassee was founded in 1903 by Miss Anna Chaires and other prominent Tallahassee women. The club helped Tallahassee's less fortunate citizens, and in 1910 was instrumental in securing funding for building the first Leon High School. It endorsed the 19th Amendment, which gave women the right to vote in 1920. The club supported the Girl Scouts and the 4-H Club during the 1920s, and fought against poverty during the Great Depression. During World War II, the clubhouse was operated by the Red Cross to roll bandages and participate in other activities which furthered the war effort. Since the 1950s, the Woman's Club has been the site of many functions in support of a variety of charitable causes, as well as countless social events. The Mediterranean Revival style clubhouse, which became Tallahassee's unofficial civic and entertainment center after 1927, was designed by E.D. Fitchner of Louisville, Kentucky. It is located in the Los Robles subdivision, a planned Mediterranean Revival style development. Only the development's entry arch and the clubhouse were actually designed in this architectural style. The Woman's Club of Tallahassee was listed on the National Register of Historic Places in 1987. F-770 A FLORIDA HERITAGE SITE SPONSORED BY AJAX CONSTRUCTION COMPANY BENSON'S HEATING AND AIR CONDITIONING COMPANY CHARLENE HOGAN, SUE TULLY AND THE FLORIDA DEPARTMENT OF STATE 2013" National Register of Historic Places #87002046 Top of sign: Florida Heritage emblem