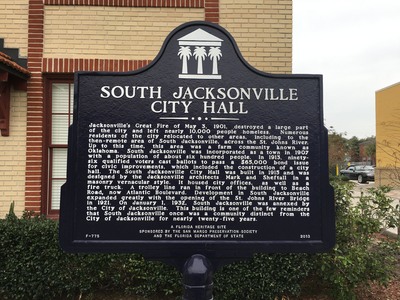 The marker reads: "SOUTH JACKSONVILLE CITY HALL -- Jacksonville’s Great Fire of May 3, 1901, destroyed a large a large part of the city and left nearly 10,000 people homeless. Numerous residents of the city relocated to other areas, including to the then-remote area of South Jacksonville, across the St. Johns River. Up to this time, this area was a farm community known as Oklahoma. South Jacksonville was incorporated as a town in 1907 with a population of about six hundred people. In 1913, ninety-six qualified voters cast ballots to pass a $65,000 bond issue for civic improvements, which included the construction of a city hall. The South Jacksonville City Hall was built in 1915 and was designed by the Jacksonville architects Mark and Sheftall in a masonry vernacular style. It housed city offices, as well as a fire truck. A trolley line ran in front of the building to Beach Road, now Atlantic Boulevard. Development in South Jacksonville expanded greatly with the opening of the St. Johns River Bridge in 1921. On January 1, 1932, South Jacksonville was annexed by the City of Jacksonville. This building is one of the few reminders that South Jacksonville once was a community distinct from the City of Jacksonville for nearly twenty-five years. F-775 A FLORIDA HERITAGE SITE SPONSORED BY THE SAN MARCO PRESERVATION SOCIETY AND THE FLORIDA DEPARTMENT OF STATE 2013" Top of sign: Florida Heritage emblem