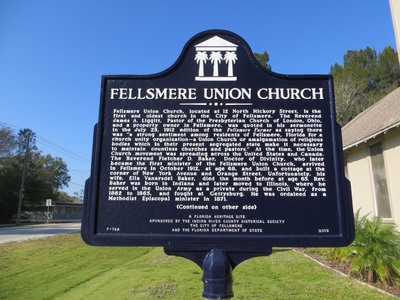 The marker reads: "FELLSMERE UNION CHURCH -- Fellsmere Union Church, located at 12 North Hickory Street, is the first and oldest church in the City of Fellsmere. The Reverend James A. Liggitt, Pastor of the Presbyterian Church of London, Ohio, and a property owner in Fellsmere, was quoted in his sermonette in the July 25, 1912 edition of the Fellsmere Farmer as saying there was "a strong sentiment among residents of Fellsmere, Florida for a church unity organization—a Union Church or amalgamation of religious bodies which in their present segregated state make it necessary to maintain countless churches and pastors." At the time, the Union Church movement was spreading across the United States and Canada. The Reverend Fletcher D. Baker, Doctor of Divinity, who later became the first minister of the Fellsmere Union Church, arrived in Fellsmere in October 1912, at age 68, and built a cottage at the corner of New York Avenue and Orange Street. Unfortunately, his wife, Ella Vanarsdel Baker, died the month before at age 65. Rev. Baker was born in Indiana and later moved to Illinois, where he served in the Union Army as a private during the Civil War, from 1862 to 1865, and fought at Gettysburg. He was ordained as a Methodist Episcopal minister in 1871. (Continued on other side) F-766 A FLORIDA HERITAGE SITE SPONSORED BY THE INDIAN RIVER COUNTY HISTORICAL SOCIETY THE CITY OF FELLSMERE AND THE FLORIDA DEPARTMENT OF STATE 2013". Top of sign: Florida Heritage emblem