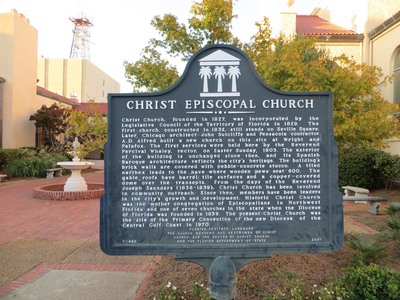 The marker reads: "CHRIST EPISCOPAL CHURCH -- Christ Church, founded in 1827, was incorporated by the Legislative Council of the Territory of Florida in 1829. The first church, constructed in 1832, still stands on Seville Square. Later, Chicago architect John Sutcliffe and Pensacola contractor A.D. Alfred built a new church on this site at Wright and Palafox. The first services were held here by the Reverend Percival Whaley, rector, on Easter Sunday, 1903. The exterior of the building is unchanged since then, and its Spanish Baroque architecture reflects the city’s heritage. The building’s brick walls are covered with pebble-concrete stucco. A tiled narthex leads to the nave where wooden pews seat 600. The gable roofs have barrel tile surfaces and a copper-covered dome over the transepts. From the days of the Reverend Joseph Saunders (1836-1839), Christ Church has been involved in community outreach. Since then, members have been leaders in the city’s growth and development. Historic Christ Church was the mother congregation of Episcopalians in Northwest Florida and one of seven churches in the state when the Diocese of Florida was founded in 1839. The present Christ Church was the site of the Primary Convention of the new Diocese of the Central Gulf Coast in 1970. F-445 FLORIDA HERITAGE LANDMARK THE CHURCH WARDENS AND VESTRYMEN OF CHRIST CHURCH AND THE RECTOR OF CHRIST CHURCH AND THE FLORIDA DEPARTMENT OF STATE 2001". Top of sign: Florida Heritage emblem