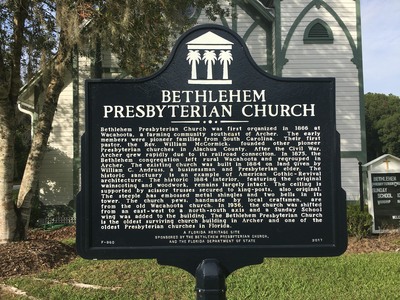 The marker reads: "BETHLEHEM PRESBYTERIAN CHURCH - Bethlehem Presbyterian Church was first organized in 1866 at Wacahoota, a farming community southwest of Archer. The early members were pioneer families from South Carolina. Their first pastor, the Rev. William McCormick, founded other pioneer Presbyterian churches in Alachua County. After the Civil War, Archer grew rapidly due to its railroad connection. In 1875, the Bethlehem congregation left rural Wacahoota and regrouped in Archer. The existing church was built in 1884 on land given by William C. Andruss, a businessman and Presbyterian elder. The historic sanctuary is an example of American Gothic-Revival architecture. The historic 1884 interior, featuring the original wainscoting and woodwork, remains largely intact. The ceiling is supported by scissor trusses secured to king-posts. The steeple has embossed metal shingles and two bells in its tower. The church pews, handmade by local craftsmen, are from the old Wacahoota church. In 1936, the church was shifted from an east-west to a north-south axis and a Sunday School wing was added to the building. The Bethlehem Presbyterian Church is the oldest surviving church building in Archer and one of the oldest Presbyterian churches in Florida. F-860 A FLORIDA HERITAGE SITE SPONSORED BY THE BETHLEHEM PRESBYTERIAN CHURCH, AND THE FLORIDA DEPARTMENT OF STATE 2017" Top of sign: Florida Heritage emblem