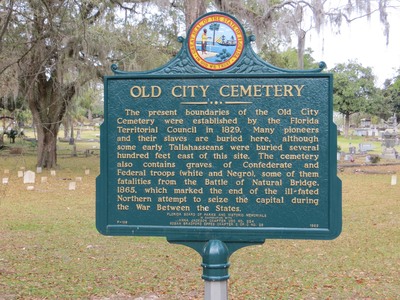 The marker reads: "OLD CITY CEMETERY -- The present boundaries of the Old City Cemetery were established by the Florida Territorial Council in 1829. Many pioneers and their slaves are buried here, although some early Tallahasseans were buried several hundred feet east of this site. The cemetery also contains graves of Confederate and Federal troops (white and Negro), some of the fatalities from the Battle of Natural Bridge, 1865, which marked the end of the ill-fated Northern attempt to seize the capital during the War Between the States. F-106 FLORIDA BOARD OF PARKS AND HISTORIC MEMORIALS IN COOPERATION WITH ANNA JACKSON CHAPTER UDC NO. 224 SUSAN BRADFORD EPPES CHAPTER C OF C NO. 26" Top of the sign: Image of the Great Seal of the State of Florida – In God We Trust