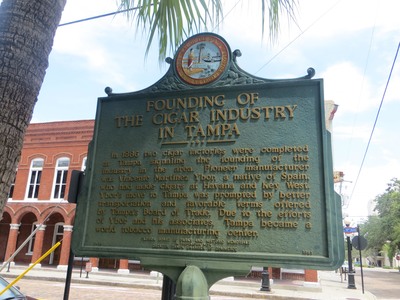 The marker reads: "FOUNDING OF THE CIGAR INDUSTRY IN TAMPA In 1886 two cigar factories were completed at Tampa signaling the founding of the industry in the area. Pioneer manufacturer was Vincente Martinez Ybor, a native of Spain, who had made cigars at Havana and Key West. Ybor's move to Tampa was prompted by better transportation and favorable terms offered by Tampa's Board of Trade. Due to the efforts of Ybor and his associates, Tampa became a world tobacco manufacturing center. F-39 FLORIDA BOARD OF PARKS AND HISTORIC MEMORIALS IN COOPERATION WITH GREATER TAMPA CHAMBER OF COMMERCE 1961" Top of the sign: Image of the Great Seal of the State of Florida – In God We Trust