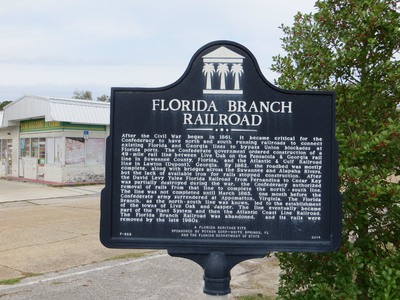 The marker reads: "FLORIDA BRANCH RAILROAD After the Civil War began in 1861, it became critical for the Confederacy to have north and south running railroads to connect existing Florida and Georgia lines to bypass Union blockades at Florida ports. The Confederate government ordered construction of a 49-mile rail line between Live Oak on the Pensacola & Georgia rail line in Suwannee County, Florida, and the Atlantic & Gulf Railroad line in Lawton (Dupont), Georgia. By 1862, the roadbed was mostly complete, along with bridges across the Suwannee and Alapaha Rivers, but the lack of available iron for rails stopped construction. After the David Levy Yulee Florida Railroad from Fernandina to Cedar Key was partially destroyed during the war, the Confederacy authorized removal of rails from that line to complete the north-south line. The line was not completed until March 1865, one month before the Confederate army surrendered at Appomattox, Virginia. The Florida Branch, as the north-south line was known, led to the establishment of the towns of Live Oak and Jasper. The line eventually became part of the Plant System and then the Atlantic Coast Line Railroad. The Florida Branch Railroad was abandoned, and its rails were removed by the late 1980s. F-822 A FLORIDA HERITAGE SITE SPONSORED BY POTASH CORP-WHITE SPRINGS, FL AND THE FLORIDA DEPARTMENT OF STATE 2014" Top of sign: Florida Heritage emblem