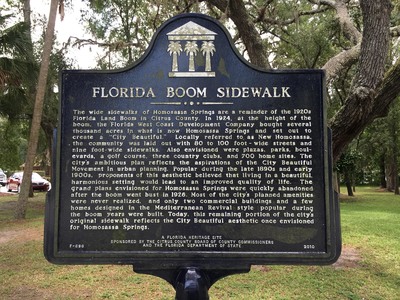 The marker reads: "FLORIDA BOOM SIDEWALK The wide sidewalks of Homosassa Springs are a reminder of the 1920s Florida Land Boom in Citrus County. In 1924, at the height of the boom, the Florida West Coast Development Company bought several thousand acres in what is now Homosassa Springs and set out to create a "City Beautiful." Locally referred to as New Homosassa, the community was laid out with 80 to 100 foot-wide streets and nine foot-wide sidewalks. Also envisioned were plazas, parks, boulevards, a golf course, three country clubs, and 700 home sites. The city's ambitious plan reflects the aspirations of the City Beautiful Movement in urban planning. Popular during the late 1890s and early 1900s, proponents of this aesthetic believed that living in a beautiful, harmonious setting would lead to an improved quality of life. The grand plans envisioned for Homosassa Springs were quickly abandoned after the boom went bust in 1926. Most of the city's planned amenities were never realized, and only two commercial buildings and a few homes designed in the Mediterranean Revival style popular during the boom years were built. Today, this remaining portion of the city's original sidewalk reflects the City Beautiful aesthetic once envisioned for Homosassa Springs. F-696 A FLORIDA HERITAGE SITE SPONSORED BY THE CITRUS COUNTY BOARD OF COUNTY COMMISSIONERS AND THE FLORIDA DEPARTMENT OF STATE 2010" Top of sign: Florida Heritage emblem