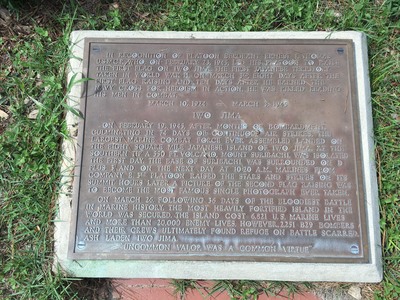 The marker reads: "In recognition of Platoon Sergeant Ernest I. Thomas U.S.M.C.R. who, on February 23, 1945, led his platoon to raise the first flag on Iwo Jima, the first Japanese territory taken in World War II. On March 3rd, eight days after the first flag raising and ten days after he earned the Navy Cross for heroism in action, he was killed leading his men in combat. March 10, 1924 - March 3, 1945 Iwo Jima On February 19, 1945 after months of bombardment, culminating in 74 days of continuous air strikes, the largest Marine combat force ever assembled landed on the eight square mile Japanese island of Iwo Jima. At the southern tip a 550 ft. volcano, Mount Suribachi, was isolated the first day. The base of Suribachi was surrounded on D plus 3 and on the next day at 10:20 a.m., Marines from Company E, 3rd Platoon raised the Stars and Stripes on its summit. Hours later a picture of the second flag raising was to become the most famous single photograph ever taken. On March 26, following 36 days of the bloodiest battle in Marine history, the most heavily fortified island in the world was secured. The island cost 6,821 U.S. Marine lives and more than 20,000 enemy lives. However, 2,251 B29 bombers and their crews ultimately found refuge on battle scarred, ash laden Iwo Jima. "Uncommon valor was a common virtue""