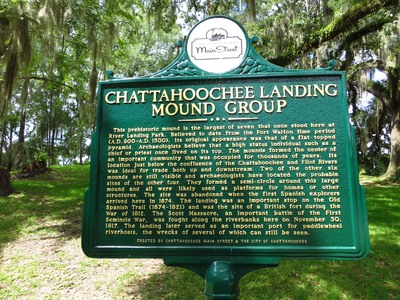 The marker reads: "CHATTAHOOCHEE LANDING MOUND GROUP. This prehistoric mound is the largest of seven that once stood here at River Landing Park. Believed to date from the Fort Walton time period (A.D. 900-A.D. 1500), its original appearance was that of a flat-topped pyramid. Archaeologists believe that a high status individual such as a chief priest once lived on its top. The mounds formed the center of an important community that was occupied for thousands of years. Its location just below the confluence of the Chattahoochee and Flint Rivers was ideal for trade both up and downstream. Two of the other six mounds are still visible and archaeologists have located the probable sites of the other four. They formed a semi-circle around this large mound and all were likely used as platforms for homes or other structures. The site was abandoned when the first Spanish explores arrived here in 1674. The landing was an important stop on the Old Spanish Trail (1674-1821) and was the site of a British fort during the War of 1812. The Scott Massacre, an important battle of the First Seminole War, was fought along the riverbanks here on November 30, 1817. The landing later served as an important port for paddlewheel riverboats, the wrecks of several of which can still be seen. ERECTED BY CHATTAHOOCHEE MAIN STREET & THE CITY OF CHATTAHOOCHEE" Top of sign: Chattahoochee Main Street Florida’s Scenic River City emblem