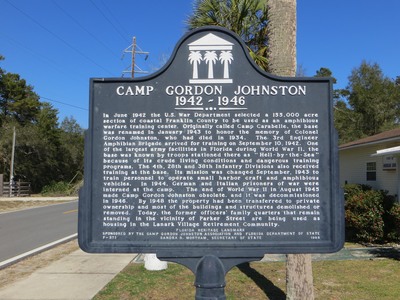 The marker reads: "CAMP GORDON JOHNSTON 1942-1946 In June 1942 the U.S. War Department selected a 155,000 acre section of coastal Franklin County to be used as an amphibious warfare training center. Originally called Camp Carabelle, the base was renamed in January 1943 to honor the memory of Colonel Gordon Johnston, who had died in 1934. The 3rd Engineer Amphibian Brigade arrived for training on September 10, 1942. One of the largest army facilities in Florida during World War II, the base was known by troops stationed there as "Hell-by-the-Sea" because of its crude living conditions and dangerous training programs. The 4th, 28th and 38th Infantry Divisions also received training at the base. Its mission was changed September, 1943 to train personnel to operate small harbor craft and amphibious vehicles. In 1944, German and Italian prisoners of war were interned at the camp. The end of World War II in August 1945 made Camp Gordon Johnston obsolete and it was decommissioned in 1946. By 1948 the property had been transferred to private ownership and most of the buildings and structures demolished or removed. Today, the former officers' family quarters that remain standing in the vicinity of Parker Street are being used as housing in Lanark Village Retirement Community. F-371 FLORIDA HERITAGE LANDMARK SPONSORED BY THE CAMP GORDON JOHNSTON ASSOCIATION AND FLORIDA DEPARTMENT OF STATE SANDRA B. MORTHAM, SECRETARY OF STATE 1996" Top of sign: Florida Heritage emblem