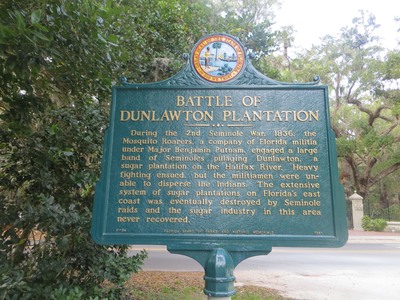 The marker reads: "BATTLE OF DUNLAWTON PLANTATION - During the 2nd Seminole War, 1836, the Mosquito Roarers, a company of Florida militia under Major Benjamin Putnam, engaged a large band of Seminoles pillaging Dunlawton, a sugar plantation on the Halifax River. Heavy fighting ensued, but the militiamen were unable to disperse the Indians. The extensive system of sugar plantations on Florida's east coast was eventually destroyed by Seminole raids and the sugar industry in this area never recovered. F-34 FLORIDA BOARD OF PARKS AND HISTORIC MEMORIALS 1961" Top of the sign: Image of the Great Seal of the State of Florida – In God We Trust