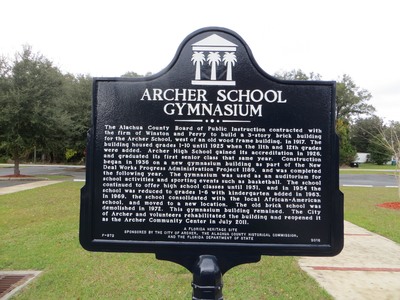 The marker reads: "ARCHER SCHOOL GYMNASIUM The Alachua County Board of Public Instruction contracted with the firm of Winston and Perry to build a 3-story brick building for the Archer School, west of an old wood frame building, in 1917. The building housed grades 1-10 until 1925 when the 11th and 12th grades were added. Archer High School gained its accreditation in 1926, and graduated its first senior class that same year. Construction began in 1936 on a new gymnasium building as part of the New Deal Works Progress Administration Project 1189, and was completed the following year. The gymnasium was used as an auditorium for school activities and sporting events such as basketball. The school continued to offer high school classes until 1951, and in 1954 the school was reduced to grades 1-6 with kindergarten added in 1963. In 1969, the school consolidated with the local African-American school, and moved to a new location. The old brick school was demolished in 1972. This gymnasium building remained. The City of Archer and volunteers rehabilitated the building and reopened it as the Archer Community Center in July 2011. F-972 A FLORIDA HERITAGE SITE SPONSORED BY THE CITY OF ARCHER, THE ALACHUA COUNTY HISTORICAL COMMISSION, AND THE FLORIDA DEPARTMENT OF STATE 2016" Top of sign: Florida Heritage emblem