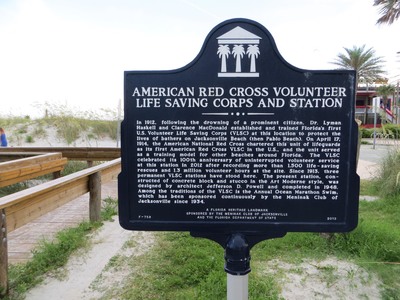 The marker reads: "AMERICAN RED CROSS VOLUNTEER LIFE SAVING CORPS AND STATION In 1912, following the drowning of a prominent citizen, Dr. Lyman Haskell and Clarence MacDonald established and trained Florida’s first U.S. Volunteer Life Saving Corps (VLSC) at this location to protect the lives of bathers on Jacksonville Beach (then Pablo Beach). On April 17, 1914, the American National Red Cross chartered this unit of lifeguards as its first American Red Cross VLSC in the U.S., and the unit served as a training model for other beaches around Florida. The VLSC celebrated its 100th anniversary of uninterrupted volunteer service at this station in 2012 after recording more than 1,500 life-saving rescues and 1.3 million volunteer hours at the site. Since 1913, three permanent VLSC stations have stood here. The present station, constructed of concrete block and stucco in the Art Moderne style, was designed by architect Jefferson D. Powell and completed in 1948. Among the traditions of the VLSC is the Annual Ocean Marathon Swim, which has been sponsored continuously by the Meninak Club of Jacksonville since 1934. F-758 A FLORIDA HERITAGE LANDMARK SPONSORED BY THE MENINAK CLUB OF JACKSONVILLE AND THE FLORIDA DEPARTMENT OF STATE 2012" Top of sign: Florida Heritage emblem