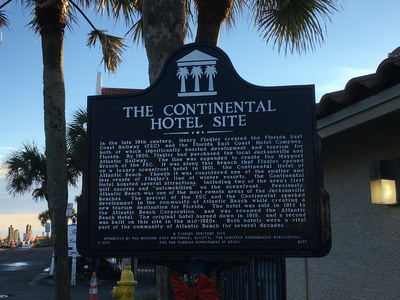 The marker reads: "THE CONTINENTAL HOTEL SITE -- In the late 19th century, Henry Flagler created the Florida East Coast Railway (FEC) and the Florida East Coast Hotel Company, both of significantly boosted development and tourism for Florida. By 1900, Flagler had purchased the local Jacksonville and Atlantic Railway. The line was expanded to create the Mayport Branch of the FEC. It was along this branch that Flagler opened up a luxury oceanfront hotel in 1901, the Continental Hotel of Atlantic Beach. Though it was considered one of the smaller and less ornate of Flagler’s line of winter resorts, the Continental boasted several attractions, including two of the area’s first golf courses and “automobiling” on the oceanfront. Previously, Atlantic Beach was one of the most remote areas of the Jacksonville Beaches. The arrival of the FEC and the Continental sparked development in the community of Atlantic Beach while creating a new tourism destination for Florida. The hotel was sold in 1913 to the Atlantic Beach Corporation, and was renamed the Atlantic Beach Hotel. The original hotel burned down in 1919, and a second was built on this site in the mid-1920s. Both hotels were a vital part of the community of Atlantic Beach for several decades. F-953 A FLORIDA HERITAGE SITE SPONSORED BY THE BEACHES AREA HISTORICAL SOCIETY, THE CLOISTER CONDOMINIUM ASSOCIATION, AND THE FLORIDA DEPARTMENT OF STATE 2017" Top of sign: Florida Heritage emblem