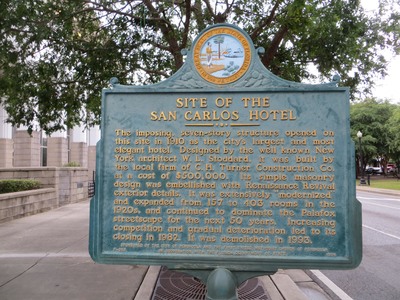 The marker reads: "SITE OF THE SAN CARLOS HOTEL - The imposing, seven-story structure opened on this site in 1910 as the city's largest and most elegant hotel. Designed by the well known New York architect W.L. Stoddard, it was built by the local firm of C.H. Turner Construction Co. at a cost of $500,000. Its simple masonry design was embellished with Renaissance Revival exterior details. It was extensively “modernized” and expanded from 157 to 403 rooms in the 1920s, and continued to dominate the Palafox streetscape for the next 50 years. Increasing competition and gradual deterioration led to its closing in 1982. It was demolished in 1993. F-352 SPONSORED BY THE CITY OF PENSACOLA AND THE FIRST UNITED METHODIST CHURCH OF PENSACOLA IN COOPERATION WITH THE FLORIDA DEPARTMENT OF STATE 1994". National Register of Historic Places #82002374.. Top of the sign: Image of the Great Seal of the State of Florida – In God We Trust