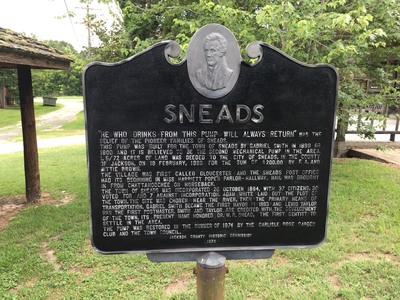 The marker reads: "SNEADS "He who drinks from this pump will always return" was the belief of the pioneer families of Sneads. This pump was built for the town of Sneads by Gabriel Smith in 1899 or 1900 and it is believed to be the second mechanical pump in the area. 1.5/72 acres of land was deeded to the city of Sneads, in the county of Jackson, on 18 February, 1899 for the sum of $200.00 by F.A. and Mittie Brown. The village was first called Gloucester and the Sneads post office had its beginning in Miss Harriett Pope's parlor-hallway. Mail was brought in from Chattahoochee on horseback. The town of Sneads was incorporated 26 October 1894, with 37 citizens. 30 voted for and 7 against incorporation. Adam White laid out the plot of the town. The site was chosen near the river, then the primary means of transportation. Gabriel Smith became the first mayor in 1893 and Lewis Taylor was the first postmaster. Smith and Taylor are credited with the development of the town. Its present name honored Dr. W.R. Snead, the first dentist to settle in the area. The pump was restored in the summer of 1974 by the Carlisle Rose Garden Club and the town council. JACKSON COUNTY HISTORIC COMMISSION 1976" Top of sign: Andrew Jackson emblem