Site of the Battle of Marianna Marker Marianna, FL 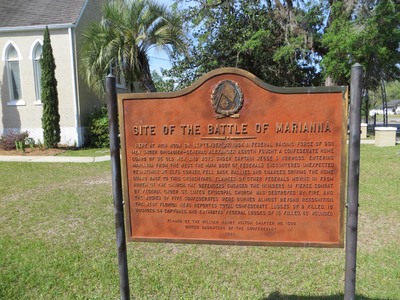 The marker reads: "SITE OF THE BATTLE OF MARIANNA -- Here at high noon on September 27, 1864, a Federal raiding force of 900 men under Brigadier-General Alexander Asboth fought a Confederate home guard of 95 old men and boys under Captain Jesse J. Norwood. Entering Marianna from the west, the main body of Federals encountered unexpected resistance at Ely’s Corner, fell back, rallied, and charged, driving the home guard back to this churchyard. Flanked by other Federals moving in from north of the church, the defenders engaged the invaders in fierce combat. By Federal order St. Luke’s Episcopal Church was destroyed by fire, and the bodies of five Confederates were burned almost beyond recognition. The West Florida News reported total Confederate losses of 9 killed, 10 wounded, 54 captured, and estimated Federal losses of 15 killed, 40 wounded. PLACED BY THE WILLIAM HENRY MILTON CHAPTER NO. 1039 UNITED DAUGHTERS OF THE CONFEDERACY 1961" Top of sign: United Daughters of the Confederacy emblem