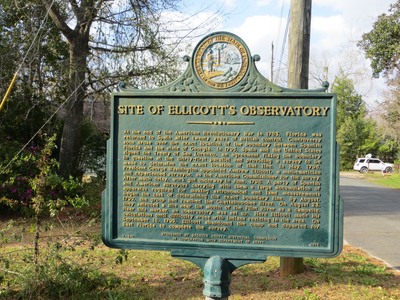 The marker reads: "SITE OF ELLICOTT'S OBSERVATORY At the end of the American Revolutionary War in 1783, Florida was returned to Spain after twenty years of British control. Controversy soon arose over the exact location of the boundary between Spanish Florida and the state of Georgia. In 1795, Spain and the United States signed the Treaty of San Lorenzo, an agreement fixing the boundary in question at the thirty-first parallel and providing a survey to be made to determine the exact location of that line. In May, 1796, President George Washington appointed Andrew Ellicott, a mathematician and experienced surveyor, as the American Commissioner for the survey. After much delay, work got underway in June, 1798. A party of Spanish and American surveyors carrying with them a large accumulation of apparatus required for making astronomical and land measurements began the task of determining the exact boundary line. By August, 1799, the group had reached the Chattahoochee River. On August 23, they selected a site near the mouth of the Flint River as a campsite. Near this marker, an observatory was set up. Here Ellicott made his calculations until difficulty arose with Indians residing in the area. On September 18, 1799, Ellicott abandoned the camp and departed for East Florida to complete the survey. F-241 SPONSORED BY GADSDEN COUNTY HISTORICAL COMMISSION IN COOPERATION WITH DEPARTMENT OF STATE 1975" Top of the sign: Image of the Great Seal of the State of Florida – In God We Trust