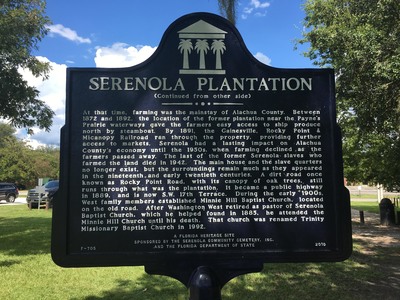 The marker reads: "SERENOLA PLANTATION -- (Continued from other side) At that time, farming was the mainstay of Alachua County. Between 1872 and 1892, the location of the former plantation near the Paynes Prarie waterways gave the farmers easy access to ship produce north by steamboat. By 1891, the Gainesville, Rocky Point & Micanopy Railroad ran through the property, providing further access to markets. Serenola had a lasting impact on Alachua County's economy until the 1950s, when farming declined as the farmers passed away. The last of the former Serenola slaves who farmed the land died in 1942. The main house and the slave quarters no longer exist, but the surroundings remain much as they appeared in the nineteenth and early twentieth centuries. A dirt road once known as Rocky Point Road, with its canopy of oak trees, still runs through what was the plantation. It became a public highway in 1889, and is now SW 17th Terrace. During the early 1900s, West family members established Minnie Hill Baptist Church, located on the old road. After Washington West retired as pastor of Serenola Baptist Church, which he helped found in 1885, he attended the Minnie Hill Baptist Church until his death. That church was renamed Trinity Missionary Baptist Church in 1992. F-705 A FLORIDA HERITAGE SITE SPONSORED BY THE SERENOLA COMMUNITY CEMETERY, INC. AND THE FLORIDA DEPARTMENT OF STATE 2010" Top of sign: Florida Heritage emblem