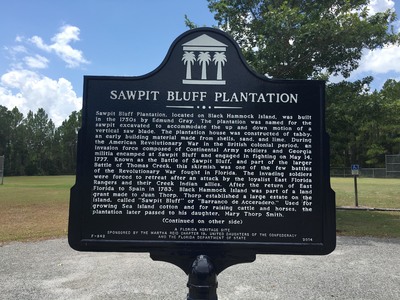 The marker reads: "SAWPIT BLUFF PLANTATION Sawpit Bluff Plantation, located on Black Hammock Island, was built in the 1750s by Edmund Gray. The plantation was named for the sawpit excavated to accommodate the up and down motion of a vertical saw blade. The plantation house was constructed of tabby, an early building material made from shells, sand, and lime. During the American Revolutionary War in the British colonial period, an invasion force composed of Continental Army soldiers and Georgia militia encamped at Sawpit Bluff and engaged in fighting on May 14, 1777. Known as the Battle of Sawpit Bluff, and part of the larger Battle of Thomas Creek, this skirmish was one of the few battles of the Revolutionary War fought in Florida. The invading soldiers were forced to retreat after an attack by the loyalist East Florida Rangers and their Creek Indian allies. After the return of East Florida to Spain in 1783, Black Hammock Island was part of a land grant made to Juan Thorp. Thorp established a large estate on the island, called "Sawpit Bluff" or "Barranco de Acceradero." Used for growing Sea Island cotton and for raising cattle and horses, the plantation later passed to his daughter, Mary Thorp Smith. (Continued on other side) F-842 A FLORIDA HERITAGE SITE SPONSORED BY THE MARTHA REID CHAPTER 19, UNITED DAUGHTERS OF THE CONFEDERACY AND THE FLORIDA DEPARTMENT OF STATE 2014"