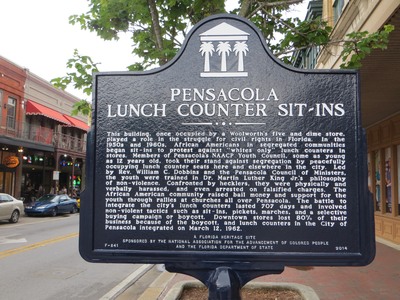 The marker reads: "PENSACOLA LUNCH COUNTER SIT-INS This building, once occupied by a Woolworth’s five and dime store, played a role in the struggle for civil rights in Florida. In the 1950s and 1960s, African Americans in segregated communities began sit-ins to protest against “whites only” lunch counters in stores. Members of Pensacola’s NAACP Youth Council, some as young as 12 years old, took their stand against segregation by peacefully occupying lunch counter seats here and elsewhere in the city. Led by Rev. William C. Dobbins and the Pensacola Council of Ministers, the youth were trained in Dr. Martin Luther King Jr.’s philosophy of non-violence. Confronted by hecklers, they were physically and verbally harassed, and even arrested on falsified charges. The African American community raised bail money and support for the youth through rallies at churches all over Pensacola. The battle to integrate the city’s lunch counters lasted 707 days and involved non-violent tactics such as sit-ins, pickets, marches, and a selective buying campaign or boycott. Downtown stores lost 80% of their business because of the boycott, and lunch counters in the City of Pensacola integrated on March 12, 1962. F-841 A FLORIDA HERITAGE SITE SPONSORED BY THE NATIONAL ASSOCIATION FOR THE ADVANCEMENT OF COLORED PEOPLE AND THE FLORIDA DEPARTMENT OF STATE 2014"