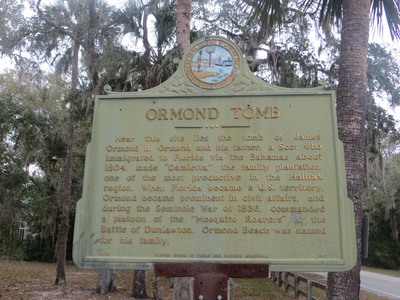 The marker reads: "ORMOND TOMB --- Near this site lies the tomb of James Ormond II. Ormond and his father, a Scot who immigrated to Florida via the Bahamas about 1804, made "Damietta," the family plantation, one of the most productive in the Halifax region. When Florida became a U.S. territory, Ormond became prominent in civil affairs, and during the Seminole War of 1836, commanded a platoon of the "Mosquito Roarers" at the Battle of Dunlawton. Ormond Beach was named for his family. F-70 FLORIDA BOARD OF PARKS AND HISTORIC MEMORIALS 1962" Top of the sign: Image of the Great Seal of the State of Florida – In God We Trust