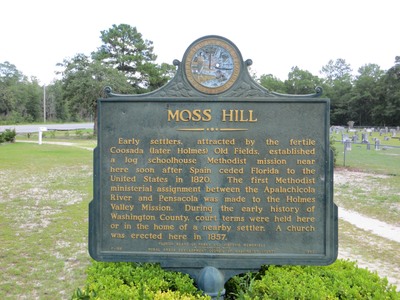 The marker reads: "MOSS HILL Early settlers, attracted by the fertile Coosada (later Holmes) Old Fields, established a log schoolhouse Methodist mission near here soon after Spain ceded Florida to the United Stated in 1820. The first Methodist ministerial assignment between the Apalachicola River and Pensacola was made to the Holmes Valley Mission. During the early history of Washington County, court terms were held here or in the home of a nearby settler. A church was erected here in 1857. F-108 FLORIDA BOARD OF PARKS AND HISTORIC MEMORIALS IN COOPERATION WITH RURAL AREAS DEVELOPMENT COUNCIL OF WASHINGTON COUNTY 1963" Top of the sign: Image of the Great Seal of the State of Florida – In God We Trust