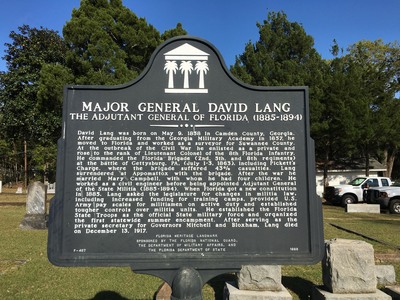 The marker reads: "MAJOR GENERAL DAVID LANG THE ADJUTANT GENERAL OF FLORIDA (1885-1894) David Lang was born on May 9, 1838 in Camden County, Georgia. After graduating from the Georgia Military Academy in 1857, he moved to Florida and worked as a surveyor for Suwannee County. At the outbreak of the Civil War he enlisted as a private and rose to the rank of Lieutenant Colonel of the 8th Florida Infantry. He commanded the Florida Brigade (2nd, 5th, and 8th regiments) at the battle of Gettysburg, PA, (July 1-3, 1863), including Pickett's Charge, where the brigade suffered 43% casualties. Lang surrendered at Appomattox with the brigade. After the war he married Mary Campbell, with whom he had four children. He worked as a civil engineer before being appointed Adjutant General of the State Militia (1885-1894). When Florida got a new constitution in 1885, Lang asked the legislature for changes in militia law, including increased funding for training camps, provided U.S. Army pay scales for militiamen on active duty and established tougher controls over militia units. He established the Florida State Troops as the official State military force and organized the first statewide summer encampment. After serving as the private secretary for Governors Mitchell and Bloxham, Lang died on December 13, 1917. F-407 FLORIDA HERITAGE LANDMARK SPONSORED BY THE FLORIDA NATIONAL GUARD, THE DEPARTMENT OF MILITARY AFFAIRS, AND THE FLORIDA DEPARTMENT OF STATE 1999" Top of sign: Florida Heritage emblem