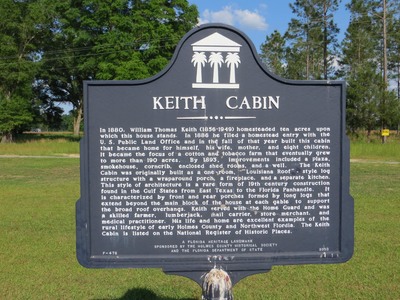 The marker reads: "KEITH CABIN -- In 1880, William Thomas Keith (1856-1949) homesteaded ten acres upon which this house stands. In 1886 he filed a homestead entry with the U.S. Public Land Office and in the fall of that year built this cabin that became home for himself, his wife, mother, and eight children. It became the focus of a cotton and tobacco farm that eventually grew to more than 190 acres. By 1893, improvements included a plaza, smokehouse, corn crib, enclosed shed rooms, and a well. The Keith Cabin was originally built as a one-room, “Louisiana Roof”- style log structure with a wraparound porch, a fireplace, and a separate kitchen. This style of architecture is a rare form of 19th century construction found only in the Gulf States from east Texas to the Florida Panhandle. It is characterized by front and rear porches formed by long logs that extend beyond the main block of the house at each gable to support the broad roof overhangs. Keith served with the Home Guard and was a skilled farmer, lumberjack, mail carrier, store merchant, and medical practitioner. His life and home are excellent examples of the rural lifestyle of early Holmes County and Northwest Florida. The Keith Cabin is listed on the National Register of Historic Places. F-476 A FLORIDA HERITAGE LANDMARK SPONSORED BY THE HOLMES COUNTY HISTORICAL SOCIETY AND THE FLORIDA DEPARTMENT OF STATE 2003" Top of sign: Florida Heritage emblem National Register of Historic Places # 00001281