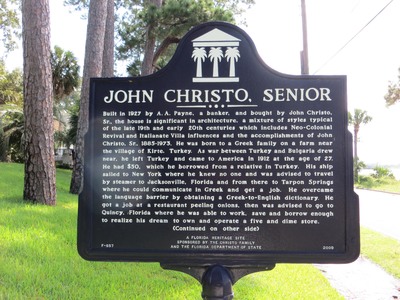 The marker reads: "JOHN CHRISTO, SENIORBuilt in 1927 by A.A. Payne, a banker, and bought by John Christo, Sr., the house is significant in architecture, a mixture of styles typical of the late 19th and early 20th centuries which includes Neo-Colonial Revival and Italianate Villa influences and the accomplishments of John Christo, Sr., 1885-1973. He was born to a Greek family on a farm near the village of Kirte, Turkey. As war between Turkey and Bulgaria drew near, he left Turkey and came to America in 1912 at the age of 27. He had $50, which he borrowed from a relative in Turkey. His ship sailed to New York where he knew no one and was advised to travel by steamer to Jacksonville, Florida and from there to Tarpon Springs where he could communicate in Greek and get a job. He overcame the language barrier by obtaining a Greek-to-English dictionary. He got a job at a restaurant peeling onions, then was advised to go to Quincy, Florida where he was able to work, save and borrow enough to realize his dream to own and operate a five and dime store. (Continued on other side) F-657 A FLORIDA HERITAGE SITE SPONSORED BY THE CHRISTO FAMILY AND THE FLORIDA DEPARTMENT OF STATE 2009"