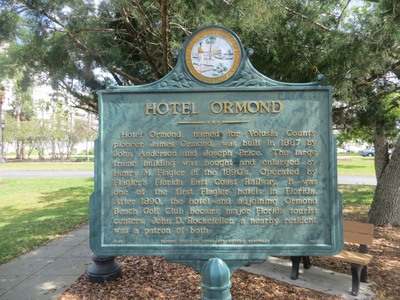 The marker reads: "HOTEL ORMOND - Hotel Ormond, named for Volusia County pioneer James Ormond, was built in 1887 by John Anderson and Joseph Price. The large frame building was bought and enlarged by Henry M. Flagler in the 1890´s. Operated by Flagler´s Florida East Coast Railway, it was one of the first Flagler hotels in Florida. After 1890, the hotel and adjoining Ormond Beach Golf Club became major Florida tourist centers. John D. Rockefeller, a nearby resident, was a patron of both. F-41 FLORIDA BOARD OF PARKS AND HISTORIC MEMORIALS 1962" Top of the sign: Image of the Great Seal of the State of Florida – In God We Trust