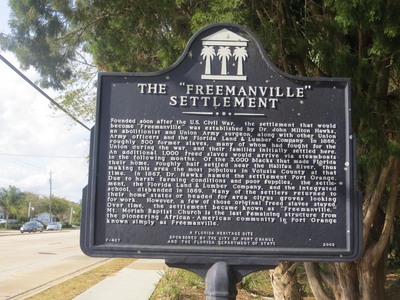 The marker reads: "THE "FREEMANVILLE" SETTLEMENT -- Founded soon after the U.S. Civil War, the settlement that would become “Freemanville” was established by Dr. John Milton Hawks, an abolitionist and Union Army surgeon, along with other Union Army officers and the Florida Land & Lumber Company. In 1866, roughly 500 former slaves, many of whom had fought for the Union during the war, and their families initially settled here. An additional 1,000 freed slaves would arrive via steamboats in the following months. Of the 3,000 blacks that made Florida their home, roughly half settled near the Halifax River, thus making this area the most populous in Volusia County at that time. In 1867, Dr. Hawks named the settlement Port Orange. Due to harsh farming conditions and poor supplies, the settlement, the Florida Land & Lumber Company, and the integrated school, disbanded in 1869. Many of the settlers returned to their home states or headed for area citrus groves looking for work. However, a few of those original freed slaves stayed. Over time, the settlement became known as “Freemanville.” Mt. Moriah Baptist Church is the last remaining structure from the pioneering African-American community in Port Orange known simply as Freemanville. F-467 A FLORIDA HERITAGE SITE SPONSORED BY THE CITY OF PORT ORANGE AND THE FLORIDA DEPARTMENT OF STATE 2002" Top of sign: Florida Heritage emblem