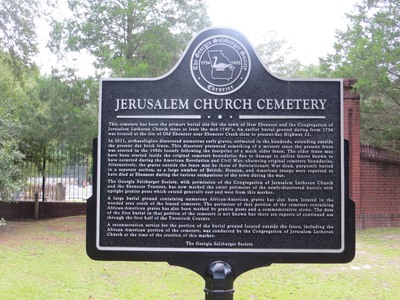 The marker reads: “JERUSALEM CHURCH CEMETERY This cemetery has been the primary burial site for the town of New Ebenezer and the congregation of Jerusalem Lutheran Church since at least the mid-1740’s. An earlier burial ground dating from 1734 was located at the site of Old Ebenezer near Ebenezer Creek close to present-day Highway 21. In 2011, archaeologists discovered numerous early graves, estimated in the hundreds, extending outside the present day brick fence. This discovery presented something of a mystery since the present fence was erected in the 1980s loosely following the footprint of a much older fence. The older fence may have been erected inside the original cemetery boundaries due to damage to earlier fences known to have occurred during the American Revolution and Civil War, obscuring original cemetery boundaries. Alternatively, the graves outside the fence may be those of Revolutionary War dead, purposely buried in a separate section, as a large number of British, Hessian, and American troops were reported to have died at Ebenezer during the various occupations of the town during the war. The Georgia Salzburger Society, with permission of the Congregation of Jerusalem Lutheran Church and the Ebenezer Trustees, has now marked the outer perimeter of the newly-discovered burials with upright granite posts which extend generally east and west from this marker. A large burial ground containing numerous African-American graves has also been located in the wooded area south of the fenced cemetery. The perimeter of that portion of the cemetery containing African-American graves has also been marked by granite posts and a commemorative stone. The date of the first burial in that portion of the cemetery is not known but there are reports of continued use through the first half of the Twentieth Century. A reconsecration service for the portion of the burial ground located outside the fence, including the African American portion of the cemetery, was conducted by the Congregation of Jerusalem Lutheran Church at the time of the erection of this marker. The Georgia Salzburger Society” Top of sign: The Georgia Salzburger Society - Ebenezer emblem Ebenezer Townsite and Jerusalem Lutheran Church National Register of Historic Places #74000674