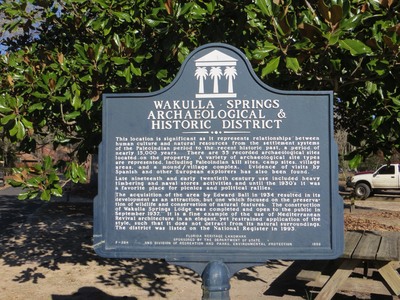 The marker reads: "WAKULLA SPRINGS ARCHAEOLOGICAL & HISTORIC DISTRICT This location is significant as it represents relationships between human culture and natural resources from the settlement systems of the Paleoindian period to the recent historic past, a period of nearly 15,000 years. There are 55 recorded archaeological sites located on the property. A variety of archaeological site types are represented, including Paleoindian kill sites, campsites, village areas, and a mound/village complex. Evidence of visits by Spanish and other European explorers has also been found. Late nineteenth and early twentieth century use included heavy timbering and naval stores activities and until the late 1930s it was a favorite place for picnics and political rallies. The acquisition of the area by Edward Ball in 1934 resulted in its development as an attraction, but one which focused on the preservation of wildlife and conservation of natural features. The construction of Wakulla Springs Lodge was completed and open to the public in September 1937. It is a fine example of the use of Mediterranean Revival architecture in an elegant, yet restrained application of the style, such that it does not detract from its natural surroundings. The district was listed on the National Register in 1993. F-394 FLORIDA HERITAGE LANDMARK SPONSORED BY THE DEPARTMENT OF STATE AND DIVISION OF RECREATION AND PARKS, ENVIRONMENTAL PROTECTION 1998" Top of sign: Florida Heritage emblem