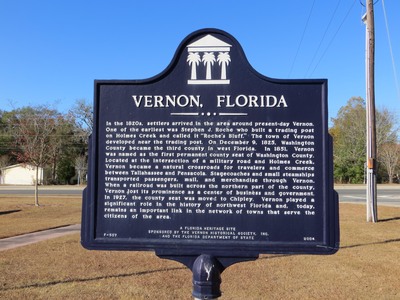 The marker reads: "VERNON, FLORIDA In the 1820s, settlers arrived in the area around present-day Vernon. One of the earliest was Stephen J. Roche who built a trading post on Holmes Creek and called it “Roche’s Bluff.” The town of Vernon developed near the trading post. On December 9, 1825, Washington County became the third county in west Florida. In 1851, Vernon was named as the first permanent county seat of Washington County. Located at the intersection of a military road and Holmes Creek, Vernon became a natural crossroads for travelers and commerce between Tallahassee and Pensacola. Stagecoaches and small steamships transported passengers, mail, and merchandise through Vernon. When a railroad was built across the northern part of the county, Vernon lost its prominence as a center of business and government. In 1927, the county seat was moved to Chipley. Vernon played a significant role in the history of northwest Florida and, today, remains an important link in the network of towns that serve the citizens of the area. F-507 A FLORIDA HERITAGE SITE SPONSORED BY THE VERNON HISTORICAL SOCIETY , INC. AND THE FLORIDA DEPARTMENT OF STATE 2004" Top of sign: Florida Heritage emblem