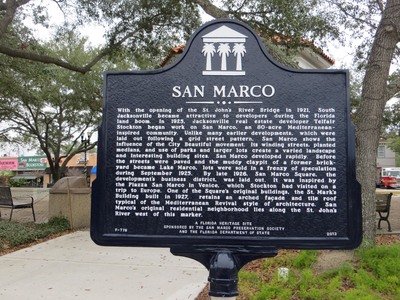 The marker reads: "SAN MARCO With the opening of the St. John's River Bridge in 1921, South Jacksonville became attractive to developers during the Florida land boom. In 1925, Jacksonville real estate developer Telfair Stockton began work on San Marco, an 80-acre Mediterranean-inspired community. Unlike many earlier developments, which were laid out following a grid street pattern, San Marco shows the influence of the City Beautiful movement. Its winding streets, planted medians, and use of parks and larger lots create a varied landscape and interesting building sites. San Marco developed rapidly. Before the streets were paved and the muddy claypit of a former brickyard became Lake Marco, lots were sold in a frenzy of speculation during September 1925. By late 1926, San Marco Square, the development's business district, was laid out. It was inspired by the Piazza San Marco in Venice, which Stockton had visited on a trip to Europe. One of the Square's original buildings, the St. Marks Building built in 1927, retains an arched facade and tile roof typical to the Mediterranean Revival style of architecture. San Marco's original residential neighborhood lies along the St. John's River west of this marker. F-776 A FLORIDA HERITAGE SITE SPONSORED BY THE SAN MARCO PRESERVATION SOCIETY AND THE FLORIDA DEPARTMENT OF STATE 2013" Top of sign: Florida Heritage emblem