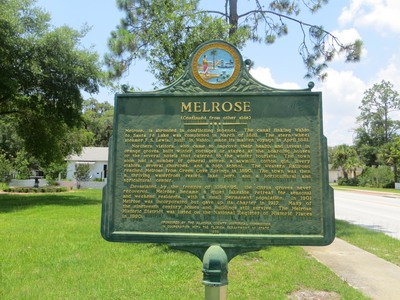 The marker reads: "MELROSE (Continued from other side)Melrose, is shrouded in conflicting legends. The canal linking Waldo to Santa Fe Lake was completed in March of 1881. The stern-wheel steamer, F.S. Lewis, built in Waldo, made its maiden voyage in April 1881. Northern visitors, who came to improve their health and invest in orange groves, built winter cottages or stayed at the boarding houses or the several hotels that catered to the winter tourists. The town soon had a number of general stores, a sawmill, cotton gin, livery stables, several churches, and a high school. The Western Railroad reached Melrose from Green Cove Springs in 1890. The town was then a thriving waterfront resort, lake port, and a horticultural and agricultural center. Devastated by the freezes of 1894-95, the citrus groves never recovered. Melrose became a quiet lakeside retreat for seasonal and week-end residents, with a small permanent population. In 1901 Melrose was incorporated but gave up its charter in 1917. Many of the nineteenth century homes and buildings still survive. The Melrose Historic District was listed on the National Register of Historic Places in 1990. SPONSORED BY THE ALACHUA COUNTY HISTORICAL COMMISSION IN COOPERATION WITH THE FLORIDA DEPARTMENT OF STATE 1990" Top of the sign: Image of the Great Seal of the State of Florida – In God We Trust