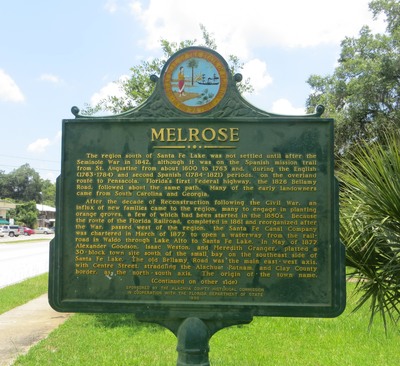 The marker reads: "MELROSE The region south of Santa Fe Lake was not settled until after the Seminole War in 1842, although it was on the Spanish mission trail from St. Augustine from about 1600 to 1763 and, during the English (1763-1784) and second Spanish (1784-1821) periods, on the overland route to Pensacola. Florida's first Federal highway, the 1826 Bellamy road, followed about the same path. Many of the early landowners came from South Carolina and Georgia. After the decade of Reconstruction following the Civil War, an influx of new families came to the region, many to engage in planting orange groves, a few of which had been started in the 1850's. Because the route of the Florida Railroad, completed in 1861 and reorganized after the War, passed west of the region, the Santa Fe Canal Company was chartered in March of 1877 to open a waterway from the railroad in Waldo through Lake Alto to Santa Fe Lake. In May of 1877 Alexander Goodson, Isaac Weston, and Meredith Granger, platted a 30-block town site south of the little bay on the southeast side of Santa Fe Lake. The old Bellamy Road was the main east-west axis, with Centre Street, straddling the Alachua, Putnam, and Clay county border, as the north-south axis. The origin of the town name, (Continued on other side) SPONSORED BY THE ALACHUA COUNTY HISTORICAL COMMISSION IN COOPERATION WITH THE FLORIDA DEPARTMENT OF STATE 1990" Top of the sign: Image of the Great Seal of the State of Florida – In God We Trust