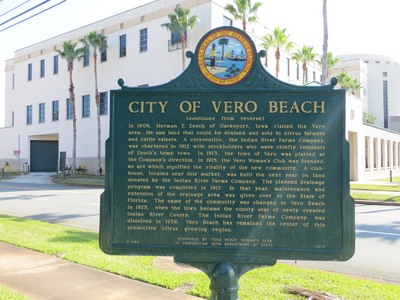 The marker reads: "CITY OF VERO BEACH (continued from reverse) In 1909 Henry T. Zeuch of Davenport, Iowa, visited the Vero area. He saw land that could be drained and sold to citrus farmers and cattle raisers. A corporation, the Indian River Farms Company was chartered in 1912 with stockholders who were chiefly residents of Zeuch's home town. In 1913 the town of Vero was plated at the Company's direction. In 1915 the Vero Woman's Club was founded, an act which signified the vitality of the new community. A club house, located near this marker was built the next year on land donated by the Indian River Farms Company. The planned drainage program was completed in 1917. In that year, maintenance and extension of the drainage area was given over to the State of Florida. The name of the community was changed to Vero Beach in 1925, when the town became the county seat of newly created Indian River County. The Indian River Farms Company was dissolved in 1936. Vero Beach has remained the center of this productive citrus growing region. F-243 SPONSORED BY VERO BEACH WOMAN'S CLUB IN COOPERATION WITH DEPARTMENT OF STATE 1975" Top of the sign: Image of the Great Seal of the State of Florida – In God We Trust