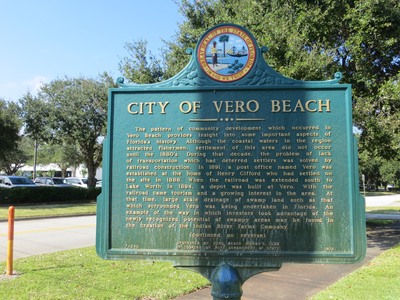 The marker reads: "CITY OF VERO BEACH The pattern of community development which occurred in Vero Beach provides insight into some important aspects of Florida's history. Although the coastal waters in the region attracted fishermen, settlement of this area did not occur until the 1880s. During that decade the problem of transportation which had deterred settlers was solved by railroad construction. In 1891 a post office named Vero was established at the home of Henry Gifford who had settled on the site in 1880. When the railroad was extended south to Lake Worth, a depot was built at Vero. With the railroad came tourism and a growing interest in the area. At that time, large scale drainage of swamp land such as that which surrounded Vero was being undertaken in Florida. An example of the way in which investors took advantage of the newly recognized potential of swampy areas may be found in creation of the Indian River River Farms Company. (continued on reverse) F-243 SPONSORED BY VERO BEACH WOMAN'S CLUB IN COOPERATION WITH DEPARTMENT OF STATE 1975" Top of the sign: Image of the Great Seal of the State of Florida – In God We Trust