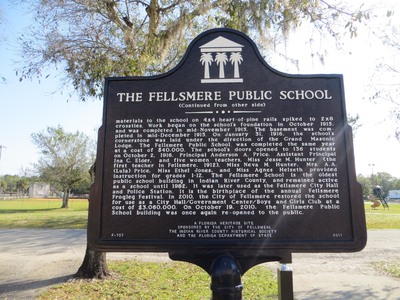 The marker reads: "THE FELLSMERE PUBLIC SCHOOL -- (Continued from other side) materials to the school on 4x4 heart-of-pine rails spiked to 2x8 crossties. Work began on the school's foundation in October 1915, and was completed in mid-November 1915. The basement was completed mid-December 1915. On January 31, 1916, the school's cornerstone was laid under the direction of the Grand Masonic Lodge. The Fellsmere Public School was completed the same year at a cost of $40,000. The school's doors opened to 136 students on October 2, 1916. Principal Anderson A. Price, Assistant Principal Ina C. Elder, and five women teachers, Miss Jesse M. Hunter (the first teacher in Fellsmere, 1912), Miss Neva M. Hunter, Mrs. A.A. (Lula) Price, Miss Ethel Jones, and Miss Agnes Helseth provided instruction for grades 1-12. The Fellsmere School is the oldest public school building in Indian River County, and remained active as a school until 1982. It was later used as the Fellsmere City Hall and Police Station. It is the birthplace of the annual Fellsmere Frogleg Festival. In 2010, the City of Fellsmere restored the school for use as a City Hall/Government Center/Boys and Girls Club at a cost of $3,060,000. On October 19, 2010, the Fellsmere Public School building was once again re-opened to the public. F-707 A FLORIDA HERITAGE SITE SPONSORED BY THE CITY OF FELLSMERE THE INDIAN RIVER COUNTY HISTORICAL SOCIETY AND THE FLORIDA DEPARTMENT OF STATE 2011" National Register of Historic Places #96001368 Top of sign: Florida Heritage emblem