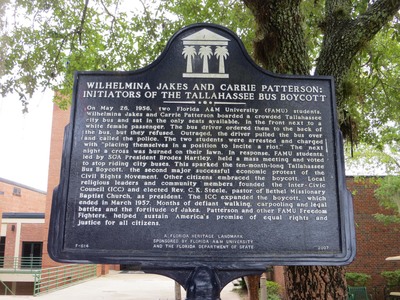 The marker reads: "WILHELMINA JAKES AND CARRIE PATTERSON: INITIATORS OF THE TALLAHASSEE BUS BOYCOTT On May 26, 1956, two Florida A&M University (FAMU) students, Wilhelmina Jakes and Carrie Patterson boarded a crowded Tallahassee city bus and sat in the only seats available, in the front next to a white female passenger. The bus driver ordered them to the back of the bus, but they refused. Outraged, the driver pulled the bus over and called the police. The two students were arrested and charged with “placing themselves in a position to incite a riot.” The next night a cross was burned on their lawn. In response, FAMU students, led by SGA President Brodes Hartley, held a mass meeting and voted to stop riding city buses. This sparked the ten-month-long Tallahassee Bus Boycott, the second major successful economic protest of the Civil Rights Movement. Other citizens embraced the boycott. Local religious leaders and community members founded the Inter-Civic Council (ICC) and elected Rev. C.K. Steele, pastor of Bethel Missionary Baptist Church, as president. The ICC expanded the boycott, which ended in March 1957. Months of defiant walking, carpooling and legal battles and the fortitude of Jakes, Patterson and other FAMU Freedom Fighters, helped sustain America’s promise of equal rights and justice for all citizens. F-614 A FLORIDA HERITAGE LANDMARK SPONSORED BY FLORIDA A&M UNIVERSITY AND THE FLORIDA DEPARTMENT OF STATE 2007" Top of sign: Florida Heritage emblem