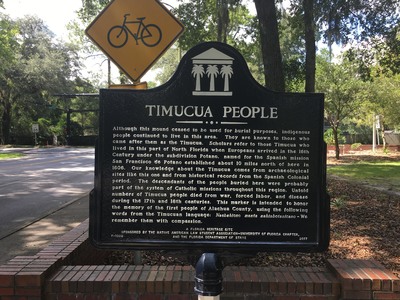 The marker reads: "TIMUCUA PEOPLE -- Although this mound ceased to be used for burial purposes, indigenous people continued to live in this area. They are known to those who came after them as the Timucua. Scholars refer to those Timucua who lived in this part of North Florida when Europeans arrived in the 16th Century under the subdivision Potano, named for the Spanish mission San Francisco de Potano established about 10 miles north of here in 1606. Our knowledge about the Timucua comes from archaeological sites like this one and from historical records from the Spanish Colonial period. The descendants of the people buried here were probably part of the system of Catholic missions throughout this region. Untold numbers of Timucua people died from war, forced labor, and disease during the 17th and 18th centuries. This marker is intended to honor the memory of the first people of Alachua County, using the following words from the Timucuan language: Naebahiono manta nahiabotanicano - We remember them with compassion. F-1002 A FLORIDA HERITAGE SITE SPONSORED BY THE NATIVE AMERICAN LAW STUDENT ASSOCIATION-UNIVERSITY OF FLORIDA CHAPTER, AND THE FLORIDA DEPARTMENT OF STATE 2017" Top of sign: Florida Heritage emblem