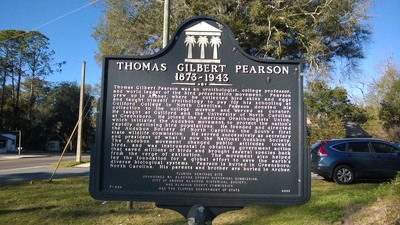 The marker reads: "THOMAS GILBERT PEARSON 1873-1943 Thomas Gilbert Pearson was an ornithologist, college professor, and world leader of the bird preservation movement. Pearson grew up in Archer, where he collected bird skins and eggs and taught himself ornithology to pay for his schooling at Guilford College in North Carolina. Pearson donated his collection to the college museum and served as curator. He taught at Guilford and the University of North Carolina at Greensboro. He joined the American Orinthologists' Union, which initiated the Audubon movement to protect the nation's rapidly declining bird populations. He founded and directed the Audubon Society of North Carolina, the South's first state wildlife commission. He served successively as secretary and president of what is now the National Audubon Society. The Audubon movement changed public attitudes toward birds, and was instrumental in obtaining government action that saved millions of birds and brought several species back from the verge of extinction. The movement also helped lay the foundation for a global effort to save the earth's diverse biological systems. Pearson is buried in Greensboro, North Carolina. His parents and brother are buried in Archer. F-420 FLORIDA HERITAGE SITE SPONSORED BY ALACHUA COUNTY HISTORICAL COMMISSION, CITY OF ARCHER ALACHUA HISTORICAL SOCIETY, AND ALACHUA COUNTY COMMISSION AND THE FLORIDA DEPARTMENT OF STATE 2000"